Remembering those who have travelled with us

This page is for Members to remember and celebrate the dogs who have shared our lives but who are sadly no longer with us.

To add your dog please email a photo and what you want to say about them.

Paul and I decided before we bred it that the ‘Qu’ litter – bred in 2003 – was to be the last Cranstal litter.  From this litter we originally retained a dog and a bitch so that they could grow old together and from the four dogs there was never any choice – other than Faris – as far as Paul was concerned.  And he justified Paul’s faith in him over and over again.

He won his first CC as a two year old and was made up a couple of days after his third birthday.  He accumulated 7 CC’s, 6 RCC’s, 4 BOBs in total plus a Hound Group 4 on the day that he gained his title.  Whilst never used in UK he sired two very successful litters by AI in Sweden with the Hisilome’s Kennel.  Amongst the champions made up from these two litters there have been 2 International Champions plus 2 saluki dogs who have gained their bloodtracking titles.  One of his puppies and four of his grandchildren have been imported into the UK and we are very proud that his grandchildren will continue to represent him in the show ring flying the Hisilome’s Swedish flag at the same time.  His son, Ch. Hisilome’s I am Iceman, who predeceased him – having had an equally successful career.

Faris was a saluki with a good sense of humour who was a happy thug in his youth but a complete joy to live with throughout his life.  We do not know where the last 11 ½ years have gone.  It only seems like yesterday that I was holding a perfect white/cream 1 lb bundle in my hand preparatory to weighing him on the day of his birth.  We have many ‘show’ photos of Faris but to me this particular photo, taken when he was far from mature, typifies his natural curiosity and the delight that our ‘platinum’ boy got out of his daily life.

We went to Sweden to choose our puppy when the Hisilome’s ‘I’ litter was six weeks old.  A litter that had been sired by AI by our own Ch. Cranstal Quantum.

From the first time we saw the four dog puppies Flash was an immediate and unanimous choice for Paul and myself. We returned to Sweden when he was four months old for some bonding – a visit which reinforced our conviction that Flash was always going to be ‘the special one’.  Seven months later – on Valentine’s Day 2009 – he arrived in the Isle of Man.  The very best Valentine I have ever received.

Shown exclusively by Paul Flash won his first CC at under 2 years of age, accumulating over the next three years a further 5 CC’s, 3 with BOB.  His 6 RCC’S also included RBIS at NSC Ch. Show in 2012.

My last view of Flash was of him walking up the path to the paddock with Paul and his father Faris. Flash’s tail was waving with excitement at the prospect of his daily flat out run where he showed his father exactly how it all should all be done.

When Paul went to get them in he found Flash lying on his side as if asleep. His feet and legs were muddy. Our beloved Flash had obviously left us doing what he enjoyed most – running like the wind in the place he loved best.

Our golden boy will always have such a special place in our hearts.

We  bought our first Saluki in 2002 from Helen Graham of Daxlore Salukis.We loved our friend’s rescue girl, Tess, she was a gold, so I wanted a gold. She was born on July 15th 2002, her name was Daxlore Dazijane at Daandazi.

She was from a litter of 6 pups, 5 bitches and 1 dog. Her sire was Aziz Pahlavan at Daxlore, her dam Daxlore Faire. She was a gold bitch with spotty front feet.  She was bought as a pet, we had no intention of showing her. She was not a prolific winner, 13 BOB’s at Open Shows.

Her last show was Manchester 2013 where she was 3rd in Veteran Bitch giving her a qualifier for Crufts 2014.

She found showing boring and would yawn at all times. She was never at ease in a show ring.

Dazi was our hunter, adored running, especially lure coursing  and racing at the greyhound track. She was 8 years old when this photo was taken by Lorraine Fitzgerald at a lure coursing event near Salisbury.

She travelled everywhere with me, usually in the front seat, where she wore a seatbelt. She was a regular visitor at the Care Home where my mother lived. The people always smiled when she arrived and would sing,’Daisy, Daisy’ to her. I had to be careful with treats as some residents would eat the dog biscuits.

I think one of her happiest days was running the lure course 9 times, at a fun event for Spinones ,in Northumberland. There was a fun dog show but her mind was elsewhere.  I don’t think many people had ever seen salukis running at top speed before, she certainly had everyone watching her.

She enjoyed agility, but had selective hearing when actually completing a circuit. There were certain obstacles which she loved, the Dog Walk, the See Saw and the A Frame, but could ignore the tunnel and the weaving poles in favour of another go in her favourite obstacles. This didn’t make her popular with those who were serious trainers for agility.

She was my girl and I still miss her. Our other girls have never taken over her bed, she was the boss and no one has taken her place. Gloria Cook and Alan Burtenshaw.

Brian and I fell in love with Rocco the first moment we met him at Zola Rawson’s Lincolnshire home.   We were so mesmerised by his elegant beauty that we forgot to say that we very much wanted to take him home. After quite a long time had passed, Zola said “Well, do you want him or not?”

Without consulting each other, we both said in unison “Yes, we want him for sure!” and home he came. Rocco soon settled in and let our two other boys, Shakir and Quest, know that he was the ‘new kid on the block’.

Sirocco gave us much excitement in the show ring winning many, many ‘Best in Show’ awards at General Open Shows and twice bringing home the coveted hand-made silver spoon and trophies for BIS at SGHC breed Open Shows.  He gathered six RCCs (inc. Crufts 2012) and gained his third CC at Driffield in 2011. He was very easy to handle as he was such a natural show boy and we were very proud of his achievements.

At home Rocco was amazingly well behaved and was a very loving and loyal boy – he was a great companion to us. Everything Rocco did was elegant and stately whether he was just sitting on the settee, drinking his water, or running in the garden.

In August 2013, we were devastated to find a small lump in the pinna of his right ear which turned out to be a mast cell cancer believed to have been triggered by a nasty horsefly bite. He fought such a brave and dignified fight and thankfully enjoyed a comfortable life until close to the end. We consider ourselves lucky to have shared time and a mutual love with him and we miss his quiet presence more than words can say as he was a very special boy. 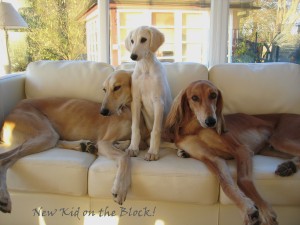 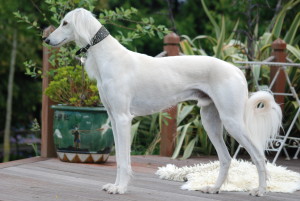